A Gift of Love

On January 12, 2010, a 7.7 earthquake ravished the little Caribbean nation of Haiti, where there were 9 million people living on a piece of land the size of Massachusetts. Eleven months later, not much has changed for the majority of Haitians. The struggle for survival continues. The average Haitian deals with it every day. Not many of the people are blessed to have faithful partners in the United States that have reached out to them as St. Joseph’s Family Homes has had. Please continue to pray for government leaders to find a way to begin to change the situation.

At St. Frances Cabrini, our children have come to truly understand the struggles of the Haitian children. Cabrini’s children are in solidarity with the Haitian children—kids caring for kids.
When the earthquake hit, St. Frances Cabrini students gave generously. In March, the Cabrini School Drama Club donated the proceeds from their bake sale, plus free-will offerings. The CCD classes have been collecting coins for many years during Lent, and this year, collected more than ever before. All funds went to St. Joseph’s Family to help rebuild two of their three homes which were destroyed. 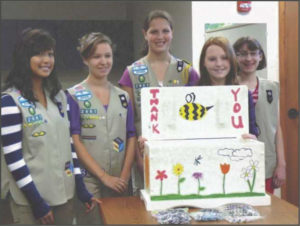 The eighth-grade Cadet Girl Scout Troop 2981 raised an unbelievable amount of $2,147.10 as part of their Silver Award badge project. Rebecca Galow, Hannah Koevner, Megan Kohlmann, Megan Drews andHolly Williams came up with the idea of weighing the amount of food wasted in the school cafeteria. Thirty pounds of food was thrown out in one day! The next day the girls gave a 15-minute presentation to each class on what it is like to be poor in several countries around the world, including Haiti. They had a “coin war” between the classrooms. The final part of the project was to make a wooden box that will be a permanent display at the school for the students to put toys in for St. Joseph’s Orphanages. They also made 100 “gospel” bracelets to be sold, with proceeds going to St. Joseph Homes.

The children and their generous giving these past months have brought renewed hope to the leadership in Haiti and to members of the Haiti Outreach Ministry at Cabrini. We have all been blessed by blessing others!