Where Were You? What Did You Think?

When you read this, it will be a few days shy of six months since the 7. 0 earthquake devastated the poorest country in the Western Hemisphere. Here in West Bend, we are enjoying our summer vacations and cookouts, but in the country of Haiti, very little has changed since January 12th. Their weather is very hot, usually 100 to 110 degrees most days. They are having a great deal of rain.  The only change the Haitians are experiencing is how to deal with what happened to them that day.

This week I am going to share with you another testimony, showing how gracious God was to the St. Joseph Family Homes.  Maya is one of the five leaders who shared his “earthquake story” with me during my April visit.  His history with St. Joe’s is one of the Prodigal Son, but space doesn’t permit me to share that now. He is 36 years old and has a wife and one son. I met Maya in February 2009, when he was our guide and interpreter.  On my recent trip (post earthquake), I asked Maya about his earthquake experiences. He became very serious, lacking his usual big smile.  I could tell the experience had affected him greatly.
Maya was in Jacmel, working with a group of American visitors who were part of the Haitian Timoun Foundation, a ministry that works very closely with St. Joseph Homes. The visitors had just arrived and wanted to do a little shopping, as they might not get that opportunity once they started their work schedules, so Maya accompanied them.  The group had just come out into the street from a shop when suddenly they heard a loud rumble. They thought it was noise from a piece of construction equipment, but, in the next second, the earth below them started to shake. They grabbed each other, trying to stand up, and Maya grabbed a tree, but his head was being banged into the tree and soon he let go and laid flat on the ground.  When the shaking stopped, he could hear screaming and crying, along with the sound of buildings crashing down around him. It became dark because of the concrete dust in the air. It was difficult to see. All that could be heard was the sound of screams in the darkness.
Maya said, “The Haitian people, including myself, didn’t know what had happened.  We had no knowledge of such a thing as an earthquake.  I thought it was the end of the world. The last time Haiti had an earthquake was 200 years ago and this was never taught in the schools. The Americans told me it was an earthquake.”
Maya gathered everyone together and said, “We need to go back to the hotel so we can find out about the two members of the group that stayed behind.” When they arrived at the hotel, they found it totally collapsed, but, by the grace of God, the two Americans were alive and not seriously injured.
The closest open space was a city park. Here the group stayed together while Maya went with a motorcycle taxi to check on Trinity House. When he arrived, he found the boys in the soccer field with neighbors. He saw that Trinity House was still standing. Maya went back to the city park and reported to the visitors that all was okay at Trinity House and the boys were safe.
Maya said he didn’t think the park would be safe for the Americans to stay overnight. So they all walked hand in hand to the Trinity House soccer field, while the aftershocks continued. Once they arrived, they joined the Haitians in songs and prayers. Maya said, “You could still hear the buildings around us collapsing.” (I could hear the fear and concern in Maya’s voice as he told this to me some three months after the quake.)
The fear of a tsunami was great, as Jacmel is a seaside town and the ocean was not acting or looking as it usually did. So the Haitians had to leave the soccer field situated close to the ocean by orders of the UN and head for the airport. The UN found a hotel for the Americans. They waited for five days for the road to open to Port-au-Prince, but that did not happen, so Maya arranged for the Americans and himself to take a boat to the Dominican Republic. When they arrived there, the Haitian Timoun Foundation was there to greet them and filled the boat with water, food, and medical supplies to return to Jacmel.
When Maya returned to Jacmel on the boat, he learned that his wife and son were safe and his house in Fermathe was not damaged. For that, he thanks the Lord.

Maya shared, “It took me about a month and a half to get over what I had experienced. Sometimes while I would be working in my office I thought the ground was moving but it wasn’t. I didn’t sleep indoors for a couple of weeks for fear of aftershocks. I believe that the two homes St. Joseph’s lost in the quake will be rebuilt, and that life has not ended for us or Haiti. Haiti will return better than before the earthquake, as so many people like Cabrini are helping us stand up. They are investing in our community and families, and we believe that the Lord will continue to provide.” 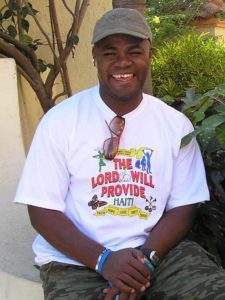 Destruction from the 7.0 Earthquake

Family members who reside in the tent city

More destruction from the 7.0 earthquake, notice the pancaked layers of floors 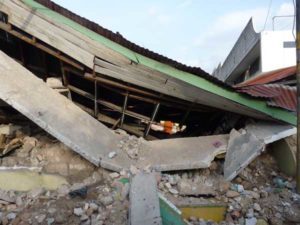