Haiti Outreach Ministry
Earthquake – Where were you? – What did you think?
By Marianne Boehme 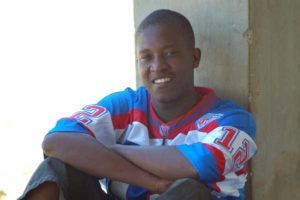 The focus of St. Joseph Family Homes is to develop leaders for the country of Haiti. St. Joseph’s has developed a Leadership Team of five young men. Two of them have already been to Cabrini and will be returning in September—Bill Nathan and Walnes Cangas. Now I would like to introduce you to another person on the Leadership Team, a young man I met at Trinity House for the first time in February 2009. His name is Jacky Asse, he is now 29 years old and he came to St. Joseph’s when he was 11 years old.

After Jacky’s parents died, he became a child slave and ran away from that situation after several months.  He lived on the streets with his two brothers until a friend of Jacky’s mother brought the three brothers to St. Joseph Family.  He graduated from St. Joe’s at age 18 and became one of the featured dancers with St. Joseph’s Resurrection Dance Theatre. He also began helping choreograph the dances. He performed with the Dance Theater at “Dance Africa” at the Brooklyn Academy of Music and the Chicago Theater in 2003, and has toured the U.S. and Canada with the Dance Theater.

In 2003, Jacky was hired as the dance teacher at Trinity House.  His leadership ability allowed his role to expand at Trinity House to an Assistant Director, and in February 2010, he was named the Director of Wings of Hope. He is now responsible for the day-to-day operations of the home and the welfare of the 38 physically and mentally-challenged children and young adults who live there.

In April, I was able to interview four of the five leadership team members. I asked each one of them to tell me their story of their experience during the earthquake. This is Jacky’s story, and it will touch your heart. He had returned that morning from St. Joseph’s in PAP and was in the kitchen area, which is the gathering spot for the older boys to share their experiences. Suddenly the floor and the building started shaking and his first thought was to run outside. He ran for the front gate, but then remembered Dadzi, the blind boy. Thankfully, when he got out of the gate he saw Dadzi was already outside. Once outside, the boys began to gather in the soccer field on the side of the school building and they began to look for everyone as well as the neighbors. The aftershocks continued and they all gathered together to pray and sing.  At first, Jacky thought it was the end of the world.  He heard people crying and screaming, but every time the aftershocks came, they would begin praying again and things would stop shaking.  He said, “I believe that was a sign that God is with us.  It was a miracle for me.”  He continued, “Before the earthquake, the Haitians that were better off never even acknowledged the poor, but now all Haitians were in the same spot.”  They had to help each other. He told me, “I couldn’t judge God and God will do His thing the way He wants to do it. Many people died and they were good people but those who are left now have a mission to speak God’s Word—to tell other people what God did for us in our lives.  Many people in Haiti don’t believe in God.  They believe in their own power to get things and now all those things are gone.”

Most importantly, he wanted to share what Michael (Founder of St. Joe’s) said to him.

“St. Joseph fall down. Wings of Hope fall down. But our faith will still be strong.”  And that is really a strong word that Michael said. Jacky was concerned about the Wings of Hope children and how they were doing but he said, “God told me that these are my children, and no matter what happens, they will be safe.” (None of them were harmed in any way.)

Jacky continued to share, “St. Joseph Family sees God’s presence because we still have a lot of friends that care about us. They come from the U. S. and Canada to visit us in our difficult time. They are telling us ‘We are with you no matter what happened.’ That is a real blessing. We believe that God will make a way to rebuild the two homes and we will not be living on the street because we are children of God and God will take care of us.”

Jacky describes the feeling of being a part of the St. Joseph Family after so much tragedy in his young life as “being like paradise.”

Please continue to pray for everyone at St. Joseph Family Homes. The two buildings are gone now, leaving holes in the skyline, just like the absence of the Twin Towers in New York. Only the front gates are there. Now comes a time of waiting until they can begin the rebuilding. Plans are still on the drawing boards.  Prayers will help them in their sorrow.  It is like the darkness before the rising of the morning sun.