“SOLIDARITY” WITH THE ST. JOSEPH FAMILY!

We have seen the pictures of St. Joseph Home collapsed during the January 12thearthquake. Three and a half months later, Michael Geilenfeld, the founder, led us through what remains of St. Joseph’s in Port-au-Prince. When I asked, “How are you doing, Michael?” he responded, “We are past the tears and on to rebuilding.” We stood on the second story of the neighboring house, watching the American volunteers working side by side with the Haitian demolition crew in temperatures that reached 100 degrees by noon.

We toured the rooms on the lower level where most of the boys had been during the quake. The walls were in perfect condition. Everything has been taken out of the old building, including any floor and wall tiles that could be removed for reuse. In Haiti, nothing is discarded because everything is so difficult to get. We saw all the artwork and furniture that Michael and Walnes retrieved from the wreckage in those weeks immediately after the quake.

St. Joseph’s has purchased the neighboring building (in part with Cabrini funds) that will act as a home base for the boys during the next years, and a place to stay when volunteers come to work. Michael, Bill, Walnes and eight of the boys from St. Joseph’s who have returned from Trinity House, are once again living in community. The boys are attending school and have the help of a tutor at night to get them caught up on what they have missed.

We slept in the newly-purchased building on our last night in Haiti. We were awakened that morning by the boys praying and praising the Lord in worship in an outdoor chapel on the other side of the wall. They have chairs arranged in a circle around a Communion table which is covered with a white cloth and decorated with greenery. A plastic awning and tree branches provided the shade.

The two homes were not connected, so the first week they had to break down several walls and clear away rubble so they could make a path between the two buildings. Without this path, they would have to walk the equivalent of two city blocks (one way) to get into each of the buildings.

Michael said to us, “Thank you for coming to Haiti when it isn’t easy to be here. It means so much to be in solidarity with Cabrini.” I said, “We have to come to encourage you all to keep on keeping on. With God, ‘All Things are Possible and the Lord Will Provide’!” 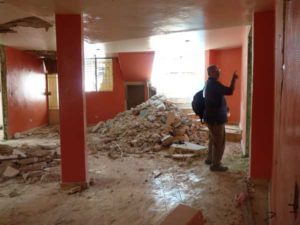 Michael Geilenfeld gives us a tour of the damage at St. Joseph, Port-au-Prince 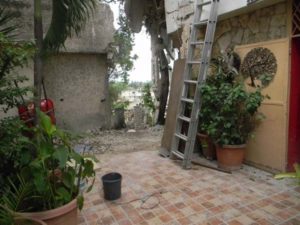 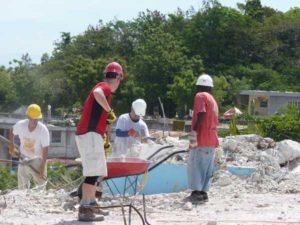 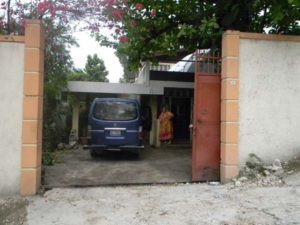 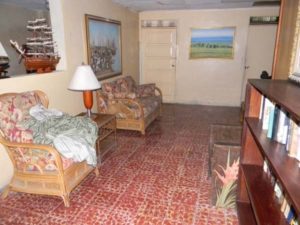 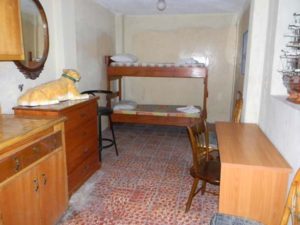