Where Were You? What Did You Think?
By Marianne Boehme

One of my goals during this past trip to Haiti was to bring back stories from the survivors of the January 12th earthquake that devastated two of the three homes of St. Joseph Family. Not everyone can go to Haiti, but we can enter into the lives of the family members of St. Joe’s by learning some details of the way the Lord saved their lives.  These testimonies will encourage all of us in our daily trails.
Space does not permit to share all the observations and situations that were put in front of Michael, Bill, Walnes and the others.  But my hope is to give you just a window into being in a 7.0 earthquake and living to tell about it.
Michael Geilenfeld, the Executive Director and Founder of St. Joseph Family, was the first person I interviewed. When the earthquake hit, Michael was on the lowest level of the house, in the kitchen preparing dinner for the children and the guests staying at the house. He immediately knew it was an earthquake.  The building moved like the Titanic in rough seas.  All the dishes tumbled out of the cabinets; all the pictures fell off of the walls. He said he immediately froze where he stood and was blessed with peacefulness.  “I didn’t panic, but I also couldn’t see because of the dust. I could hear the children moving up the stairway, and I turned and began to follow them, while telling them to keep going out. The lower stairways and hallways were not blocked, so we were able to move out.  Once outside, I immediately took a head count to make sure all the children were out. I heard Aliston calling out from the fifth-floor chapel.  I knew he was hurt, but alive, but we couldn’t get to him because the stairways had collapsed.  I heard Al calling for his wife, and I heard Renee Larson saying her husband, Ben Larson (a guest), was dead. The only person we couldn’t find was Bill Nathan, and we assumed that he had also died, as Bill was one floor higher that Ben.  Trying to process the loss of Bill was very difficult. But we all were still in a survival mode as the intense aftershocks were still happening.”

Most of us know how the Lord saved Bill Nathan’s life, but what we didn’t know was why Bill did not call the boys up to the fifth-floor chapel for prayer at the appointed time, which was his daily routine.  Bill was up on the roof around 4:45p.m., praying in preparation for chapel before he rang the bell for the boys to join him.  He said, “The Lord told me to wait until 5:00 to do it”. The earthquake hit at 4.45 p.m.  If he would have done it at the time he usually did, all 16 boys would have been on the fifth floor.  The ceiling of the fifth floor collapsed, and they all might have been killed or seriously injured.

Bill believes that the miracle of his survival, without serious injuries, was as if God raised him from the dead like he did Lazarus.   He shared that with me before we began our interview.  If Bill didn’t know that God had a call on his life before the quake to speak for the helpless children of Haiti, he knows it now.

Please pray for continued strength and wisdom for all the leaders of St. Joseph Family Homes.  The summer is soooo… hot and the work load is soooo…. heavy.  The buildings are almost completely demolished, and it has only been five months.  Everything has to be done by hand.  These projects are labor intensive.  EVERYTHING IS HARD IN HAITI.  As I watched the men working, I prayed for their safety (there is no OASA in Haiti) and I gave thanks that these men will be among a small number that will bring home a paycheck in Haiti. 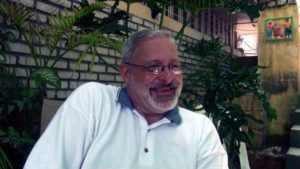 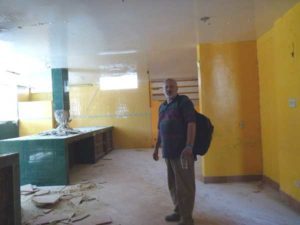 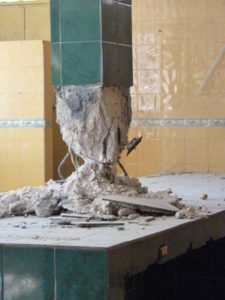 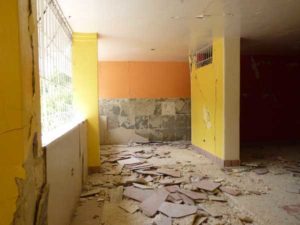 Views of the destruction inside St. Joseph Home – Port-au-Prince, Haiti 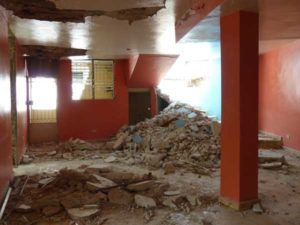 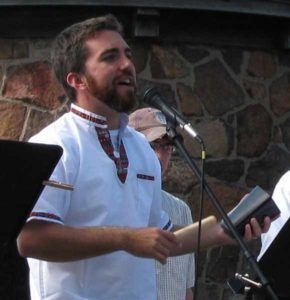 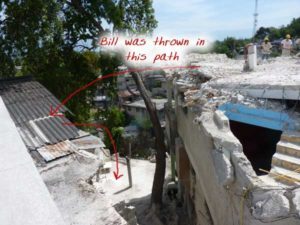 Building from which Bill Nathan thrown to the ground 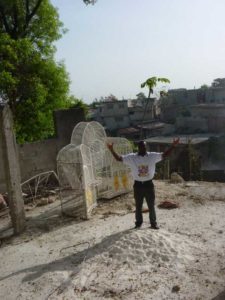 Bill Nathan standing on the spot where the Angels carried him 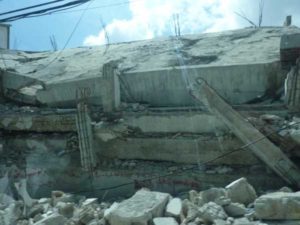 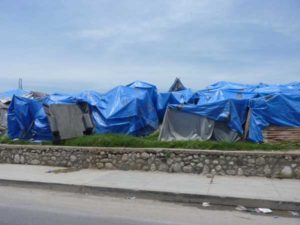 A tent city in Port-au-Prince